Come and visit our club and follow your passion! 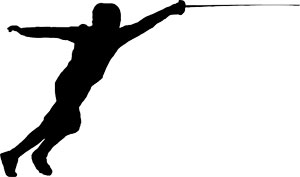 Those that have been practicing this sport for a long time can tell you plenty of beautiful things about it, but for someone who’s new to fencing, it can be quite overwhelming. It’s more difficult than taking cooking lessons or learning a new language, and even the process of choosing the right sword can be confusing. However, it’s a great sport that brings you plenty of benefits, some of them better than those that come from practicing another kind of sport. Let’s see what this is all about.

The Workout
Don’t imagine that you will lose weight overnight, but it’s a brilliant workout. During an hour of fencing, you do a lot of moving about – the forward and backward lunging, the squatting-type pose that you take between points and everything else will definitely tone all your muscles, especially the backside and the thighs.

Burning Calories
The area for fencing is 14 m long, so you’ll move around quite a lot. During the hour of fencing, you’ll burn about 400 calories while trying to outscore the opponent. It can seem difficult, but for a beginner, it’s an intense workout.

Improves the Mental Agility
Fencing is not a sport based on force, but on being able to think strategically and planning your next move. This being said, while you fence, you’ll also train your brain to think faster and better, anticipating the moves of your opponent and trying to outscore him.

New Moves
Do you know what are the body parts that this sport uses most? The answer is simple – the feet, which is directed by the brain. While you do learn to fence, you’ll see that all your movements will improve, not to mention that you’ll also be able to get a new dance faster, as the footwork is the key of this sport.

Politeness
Whoever thought that a sport could teach you polite manners? Similar to the martial arts, fencing is all about learning respect and following an ancient code of honor. A basic rule in this sport is to show courtesy to any of your opponents, no matter who you fight with. This should be done simultaneously while trying to stab them. It’s something that can seem completely impossible, but if you follow the movements of two fencers, you will see that it can be done.

Some say that the secret of this sport cannot be easily learned, but it won’t keep you from having some fun while also toning your body. It’s good exercising for both body and spirit, and while you keep yourself healthy, your brain activity will also get the benefits of the movement. It’s something you should at least consider when thinking about choosing a sport.

Fencing is almost as old as history itself, and people always wonder why others are so mesmerized by this sport. It’s quite expensive, indeed, but it has so many benefits and gives you so much passion, that you’ll instantly fall in love with it if you try it just once.

It’s History
As we said in the beginning, the history of this game dates back thousands of years. The sword fighting is what inspired this sport that comes from the 13th century. It’s the kind of sport that is also old, but it’s also constantly changing. It renews itself and everyone can still continue the tradition but also learn something new while practicing this sport.

The Uniforms
It’s a fact that the fencing uniforms look really cool. Even if the appearance is not everything, it can’t be denied that this is one of the facts that attract people to start fencing. Those who practice this sport have a jacket, a mask and these uniforms do make them feel like a fencer once they get dressed. You can ask anyone who practices it – it’s a kind of magic in wearing that uniform.

The Swords
There are three types of swords in this sport – the epee, the foil, and the sabre. A beginner will start with a plastic sword, but once you get some experience, you’ll learn the hang of every type of sword. The players develop a specific and intimate relation with their weapon, as these become a part of them, especially after hundreds of hours of practice.

The Excitement
Every fencer feels the rush of adrenaline when they step onto the strip. It’s extremely exciting and it does bring a rush of energy every time the player wears the uniform and starts fencing. It’s about the stance and the energy it brings while sharpening your mind and letting one concentrate on the game.

The Competition
Everyone who practices fencing also loves the competitions that this sport brings. It’s not just about winning, but it’s about challenging themselves to be better people. A competition always gives one the possibility to learn new things and to learn how to put them to practice. One also gets to travel to new countries, meet new people and know new cultures. It’s a great opportunity to see the alikeness and the differences between opponents and people in general.

When you decide on starting something, give this sport a try and see why it’s so amazing!